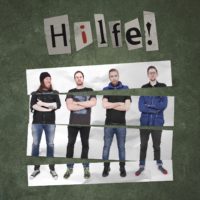 Hilfe! was founded in the deep forest of the south of Sweden, Växjö, in 2012 with the aim to make noise and drink beer. After a few gatherings the band made their first recording, Hilfe! EP-1. Eventually the band realized that people actually appreciated what they were doing. The result was some more frequent gatherings that resulted in Hilfe!-EP 2 in 2014. At present time the band will now during 2015 release Hilfe!-EP 3 at AMTY records.