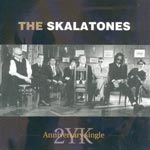 The Skalatones has been around for five years with this release and celebrates this with a jubilee-single in 500 copies. The record has two songs ”Y2Ska” och Bob Marley´s ”Rude Boy Ska”. On the record there also is a interveiw recorded in Jamaica after the recording of the CD ”Tune In”.

Review
The Skalatones have released an excellent new 7″ single to celebrate the fifth anniversary of their formation. The single features 2 new songs, ”Y2Ska” (a stomping 2 tone number) and a cover of Bob Marley´s ”Rude Boy Ska”, plus an interview the band did for Jamaican radio and was a joint release by AMTY and Step Aside Records. (Do the Dog Nr 21)