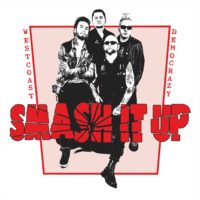 With members from Speedfreaks, Troublemakers, Sacred Sailors and On Parole, SMASH IT UP debuted with the album “Not Aiming – Just Swinging” in 2009.

The album was followed by gigs in Sweden, touring UK and several short tours in Germany and the rest of Europe (Italy, Chech Republic, Croatia etc.). The EP “Border Lines” came in 2011 and in 2013 the vinyl EP “Billy & Rudy”. After the tour “Fat Four onTour” in 2013 the band began recording the upcoming album. SMASH IT UP have just signed a deal with AMTY records from Sweden. The new full length album is called “West Coast Democrazy”.

A video and digital single for the track “Nine Nine Nine” was released 13Th of March 2015.