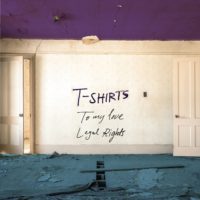 T-Shirts is known as the Two Tone style Ska pioneers of Sweden. During early 1980s they toured Sweden and could be seen and heard everywhere in Swedish’ media with hit records like “Walk on Water” and “I’m the Television”.

Members parted in 1982 and no reunion has been on the agenda until Universal released their catalogue through Digital Media in 2015. Since then the band is active again with concerts and now also with a vinyl and digital single; their first release for three and a half decade!

A: To my love
B: Legal rights