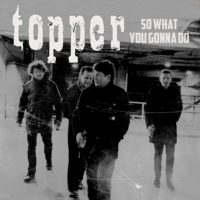 Topper is a band from Stockholm, Sweden and was formed 2000. The band members have all played in different bands since the early 80’s. In 2000 Topper released the single “Once A Punk, Always A Punk” that instantly became a Nr.1 radio hit in Sweden followed by their first album released 2005 with the same titel. 2010 Topper released their 2nd album “Punk Don’t Death – Just Get Through It”. Topper has over the years played with bands as Buzzcocks, The Boys and UK Subs.

Topper has now signed a deal with AMTY Records and released a video for the single and titel track “So What You Gonna Do”. During the fall/winter 2015 Topper will be on tour in Germany and also support The Adicts on their tour in Europe.